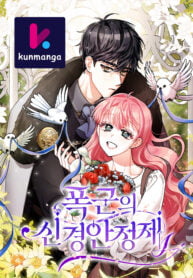 Amelie Bourbon was a witch and a woman killed by the tyrant.

Just because I criticized a novel doesn’t mean you have to make me into the supporting character Amelie, who died from the start, becoming the trauma and trigger of the heroine.

But just when Amelie visited her family to inform them of her departure, the Emperor (the tyrant) arrived. In order to escape, I transformed into a bird by magic.

But the Emperor took me with him!!!

What’s going to happen to me?!

Give A Heart To The Emperor